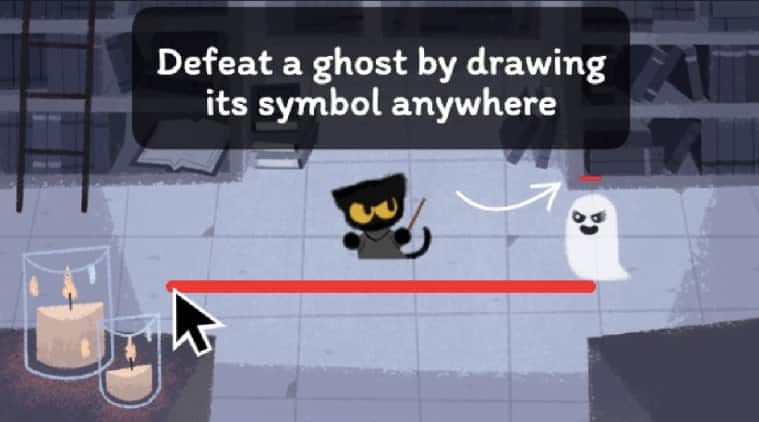 Under its ‘Stay and Play at Home with Popular Past Doodles’ initiative Google has announced that it will be posting popular interactive game doodles every day for 10 consecutive days. (Image: Google)

Popular Google Doodle Games: Since last week, Google is running its ‘Stay and Play at Home with Popular Past Doodles‘ initiative. Under this, the tech giant is bringing back select doodles from the past which were extremely popular when released. Today’s doodle is a Halloween doodle back from 2016. In the doodle, you will be a cat named Momo that has to fight ghosts with magic spells and rescue her school of magic.

When the ghosts come they have a symbol on them to be identified. You need to draw the symbol to kill the ghosts before they can reach you. If they manage to come close to you, you lose a lifeline. During the game, you have a total of five lives, after which the game ends. You need to pass all five levels of the game, defeat the ghosts and the ghost bosses with a minimum of one life heart left to win the game.

Also Read: Google brings back various popular Doodle games for you to ‘Stay and Play at Home’

Notably, these are not new doodles Google is recycling them old and popular doodles for the past. All the doodles have been listed in an archive, which can be found below the latest doodle of the day.

How to play Halloween 2016 doodle game

If you want to play the Halloween 2016 game, here are a few simple steps that you need to follow:

* Open ‘Google.com’ in your web browser.

* This will open a new results page with the doodle game as the top result.

Also Read: Thank You Coronavirus Helpers Google Doodle is a display of gratitude for health workers

* Click on the game, which will then redirect you to a new page, with the game taking up your whole screen.

* Click on play, after which the game will give you a short tutorial on how to play.

* After the tutorial finishes, the game will start.

On March 7, the search giant brought back its 2017 doodle that commemorated the 44th anniversary of a 1973 party at which DJ Kool Herc was credited with creating hip hop’s distinctive sound. The doodle lets users shuffle through various record levels used by the artiste.

For all the latest Technology News, download Indian Express App.

Cats may have been pets along the Silk Road over 1,000 years ago